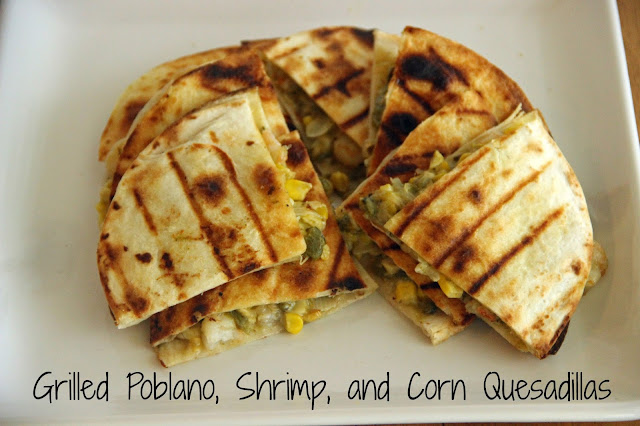 Here is a second version of Shrimp and Corn Quesadillas that we made last weekend.  I just adore anything with shrimp, especially a quesadilla!  The first version I made, a Bobby Flay recipe, has been pinned a lot on Pinterest.  I’d say these are equally as good! 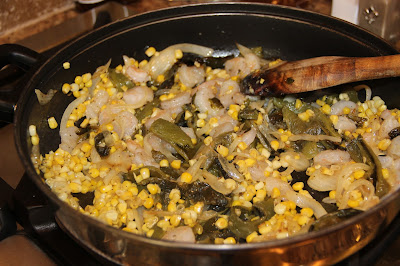 Saute onions and corn to start off.  This step alone would be a great side dish!  Then add in roasted poblanos and shrimp. 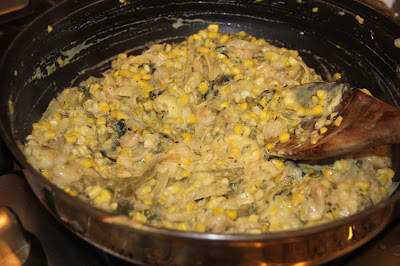 Next add in a little heavy cream, sour cream, and cheese…Yum! 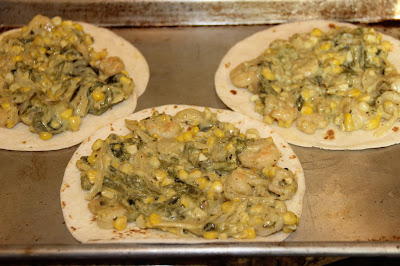 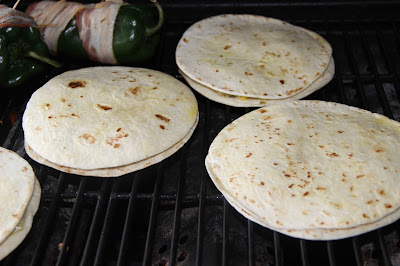 Begin by roasting the poblanos on the grill.  You want them to get charred, and that is okay.  Just keep rotating them and letting them char.  Once they are blackened, just transfer them to a plastic bag to steam for about 10 minutes.  Take them out and peel the charred skin which will leave a softened chili pepper.  I use a paper towel to rub off the charred part.  It comes right off.  If a little stays on, it’s fine!  Remove the stem and seeds and slice in strips.

While the poblanos are roasting, saute the onion in the olive oil for about 5 minutes.  Add the corn and season with salt and pepper.  I used a 1/4 tsp pepper and a heavy pinch of kosher salt.  Let this cook another 3 to 5 minutes and turn off heat while you wait on the peppers.  (This alone would make a great side dish).  I couldn’t stop snacking while I waited for the peppers!

Once peppers are steamed and cut into strips, add them to the corn and onions along with the shrimp.  Season shrimp with salt and pepper before stirring.  Cook for about 5 minutes over medium high heat.  Lower the heat and add in heavy cream and sour cream and cook for about 4 to 5 minutes.  Add in cheese and stir to melt.

Put mixture onto five tortillas.  Top each with remaining tortillas.  Brush each with a little olive oil.  I just put olive oil on the sheet pan and rub the tortillas around in it to coat them before assembling.  Grill over medium heat until golden brown on both sides.

You might also try the Bobby Flay version of Grilled Shrimp and Corn Quesadillas I posted last month: 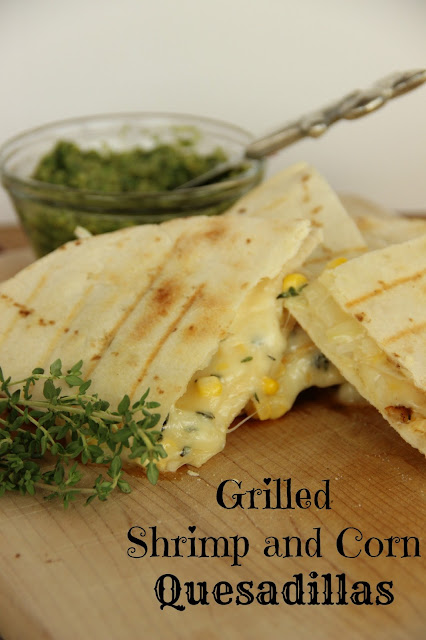